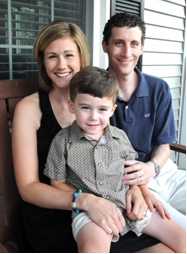 NEW HAVEN — Jennifer Bernheim doesn’t know if it's harder for her 3-year-old son to be sedated and put into an MRI machine, or for her and her husband to endure the pain of watching their child suffer through another procedure.

Either way, she’s taking matters into her own hands to make things better.

Bernheim and her husband, Eric, are working to help raise funds through Yale-New Haven Hospital’s Wish Book to buy MRI video goggles, which let patients watch movies during an MRI, and even have two-way communication with parents and doctors.

For more information or to donate to the Wish Book, go to http://www.ynhh.org/donate/wishbook.aspx. Or go to Facebook and search for "Friends of Yale-New Haven Children’s Hospital.

The goggles would benefit hundreds of kids who get MRIs at the children’s hospital, for such common reasons as cancer, epilepsy or liver transplants. About 80 percent are sedated or put under anesthesia.

For the Bernheim family, of Milford, it all began when son, Owen, was 8 months old and started losing motor skills and sleeping all the time. After seeing a few doctors, they brought Owen to Yale- New Haven Children’s Hospital, where an emergency CAT scan revealed the boy had swelling of the brain. The next morning, Owen had an MRI and was immediately brought into surgery, where doctors found a brain tumor.

The diagnosis was upsetting, but the surgery brought some relief. Owen woke from it, looked at his mother and said, “Mama.” He hadn’t spoken in two weeks.

The Bernheims took Owen to hospitals in Philadelphia and Boston for second opinions. Doctors couldn’t get samples of the tumor for analysis, because it was in the middle of his brain, and the surgery would be very risky. The tumor did not appear to be aggressive, so the consensus among experts seemed to be “wait and see.”

That approach meant frequent check-ins to the hospital for MRIs to look for swelling in Owen’s brain. For Owen’s first few MRIs, doctors put him under anesthesia. He was required to be still for 45 minutes. After that, he was sedated for MRIs. Jennifer Bernheim said both techniques are scary for child and parents, and each time he was put under or sedated, Owen would take time to get back to normal. The whole process would last about a day.

As many as three dozen children a week have anesthesia or sedation for MRIs, according to the hospital, and that doesn’t include children who get MRIs without sedation.

Not only would the video goggles improve quality of life for kids who have frequent MRIs, but it could greatly reduce the need for sedation and anesthesia.

As the years go by, doctors have given the OK for Owen to get fewer MRIs — he’s down to one a year — for which his parents are grateful. They are still taking a “wait and see” approach, and the tumor does not appear to have advanced.

“God willing, it won’t do anything more,” Jennifer Bernheim said. “We are blessed.”

Owen is now an energetic little boy who enjoys playing his drums or trying to strum along on the guitar to Eric Clapton. He’s also a big brother now: his sister, Emmy, is 15 months old.

As much as they want the goggles for their son, the Bernheims say the technology could have a much wider impact.

“They’d be helpful for all the kids who go through MRIs,” Eric Bernheim said.